sheryl dunkin is a sales rep for a pharmaceutical company. when she isn't working, she spends her time playing tennis and hanging out with her husband, as well as tending to a garden that she is trying to keep from dying (she has never been known for having a green thumb).

1.) Keep a "to-don't" list.
Everyone keeps a "to-do" list, but I think it is just as important to have a list of things you don't want to do in order to keep you grounded and focused on positive, uplifting activities. My other four rules are the top items on my "to-don't" list! 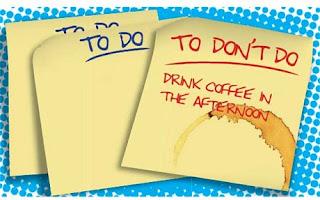 2.) Don't talk bad or gossip about others.
Negativity is a disease that we bring on ourselves, and we do it by spending most of our time talking bad and gossiping about others. If it isn't true or it is ill-natured, don't say it or participate in conversation about it.

3.) Don't over-commit yourself.
I used to say yes to everything - friends, family, work...if someone asked me to do something my automatic response was "yes!" without even thinking. As a result, I spread myself too thin, didn't perform to the best of my ability, and never had time for me. Now I am selective about what I say yes too, and it works out better for everyone.

4.) Don't participate in negative influences.
One of these has already been covered - gossip and talking bad about others. Others include divisive entertainment (talk radio, reality shows) and hanging out with people that are close-minded and not accepting of other views and opinions. If you avoid them, they can't influence you.

5.) Don't abuse your health.
Don't eat junk food, and don't sit on your couch watching television for hours on end. Eat healthy, avoid fast-food places, and go for a walk every day. Your body will thank you for it.