claire harnett is a teenager and still studying, so [according to her, not the editor!] many would say that she hasn't lived long enough to learn five rules by which to live. however, life has a funny habit of throwing stuff at you, and [according to her] it has picked her as a fairly regular target, so she has learned a lot.

1.) Even when you're going through hell, keep going.
Sometimes you get dealt an unfair hand, and it feels as though that's all you ever get. But it takes a truly strong person to deal with it and keep looking ahead. If there's one thing I've learned, it's that you have to experience hardship before you can experience joy. But trust me when I tell you, there will be joy in there somewhere.

2.) Let go.
If you insist on holding on to the past, and living for what happened yesterday, you will never reach tomorrow. Or today. Some things, however painful, just aren't worth giving up your life for.

3.) Accept help.
When people extend an olive branch, grab on to it with both hands and don't let it go. There is too little time to sit and be stubborn, too little time to be so proud that you push away those you love. Even when you feel alone, there is someone wishing they were right by your side. Let them be there.

4.) Don't let your fear become bigger than your dreams.
I'm not saying don't be scared, because fear makes success even more rewarding. But don't be overtaken by fear. Don't let the fear of failure stop you from trying, because those things you are scared of, are the things you should do first. 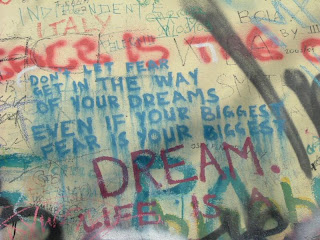 5.) Tell them.
Tell them that you love them. When you lose someone, the first thought is (or at least mine was), "Did they know how much they meant to me?", and if there is even the slightest chance that the answer is no, something is wrong. It might sound stupid, and you might be scared to say it, but if you love them you have to let them know. Yeah, you might be able to tell them tomorrow, but you might not. Don't risk it. And that one person that you thought of when you first read this, tell them now. Phone them. Walk into the next room. Travel half way across the world. Just make sure they know.

Thanks for making me sit and actually realise how much I've learned. Bad experiences are so important, because without them, I wouldn't know half of the things I know now!